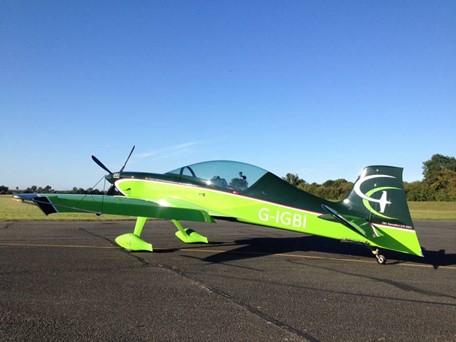 For the first time in over 30 years a plane is being designed, built and tested in the UK. The Advanced Structural Testing Centre (ASTC), part of the Advanced Manufacturing Research Centre (AMRC), is carrying out a battery of airworthiness tests on the Game Composites GB1 small aerobatic aircraft after selecting Helipebs to provide their hydraulic cylinders!

Phil Spiers, Head of Testing Laboratories at the ASTC said “It’s such a unique job for us. We haven’t done it before but we have the skills and experience in abundance to help this manufacturer get their planes in the sky as quickly as possible. We’ve constructed a bespoke test rigging, designed and cut parts using other facilities in the AMRC, such as lasering for incredible precision and we are relying on Helipebs cylinders as we always do!”.

Helipebs Controls Managing Director, Andrew Hopcraft said “We are delighted to be able to support the AMRC and this project in particular. Our cylinders have long supported cutting edge technology at the ASTC whether it is on the Bloodhound SSC or on a project like this brand new, fully composite aircraft and it is really exciting to be a part of that innovation as this is part of our culture too.”.
Lincolnshire-based Game Composites was founded with the aim of creating an easy handling two seater aircraft that would be recognised as the most fun to fly aircraft in the world.

The company’s GB1 prototype is:
• as light as (or lighter!) than available competition single seater: GB1 prototype weighs only 575 kg.
• Easy handling: must be a joy to fly without any vices.
• 1000 NM range: 320 Litres of fuel, 95 for aerobatics
• 200+ kts cruise
• Baggage compartment: easy to reach with a separate door, capable of carrying 15 kg
• Comfortable cockpit: both seats with adjustable rudder pedals, 30degree recline, adjustable ventilation and heating, excellent visibility.
• As an additional safety feature the GB1 features an Angle of Attack indicator, which was developed in house.

Aircraft Timeline:
• Design started in January 2013
• CAA Production Organisation Approval was issued in November 2014,
• EASA Design Organisation Approval was issued in August 2015.
• Construction of the prototype was started December 2014,
• On July 18th the GB1 GameBird had his successful maiden flight out of Bentwaters in the UK, now working through the flight test program.
• Right now Game Composite team works out of a small prototype shop in Lincolnshire, working on Type Certification with EASA and FAA, which is planned for mid 2016.
• Game Composite plans to start production of the GB1 towards the end of 2016.